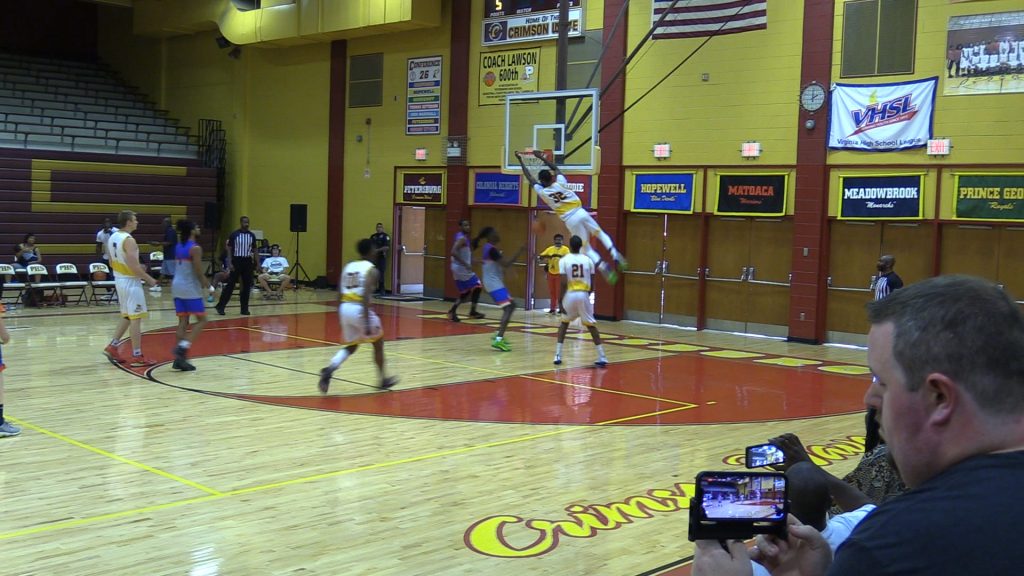 PETERSBURG – The Carolina Crusaders travelled to the Burg to face the leagues number one team. The Petersburg Cavaliers. The game decided the East Coast Basketball League Champion for 2022.

The fifth seed and Southern Conference Champion Crusaders had proven to be a giant killer of sorts taking out the league’s pre-season favorite and ECBL perennial powerhouse PrimeTime Players in the early rounds of the playoffs. Carolina pulled off another upset in the final four coming back from a double-digit deficit to knock off the South-East Division number one seed Carolina Thunder. Saturday, they had their eyes set on another upset.

For the Cavaliers the rode to the championship game had challenges of its own. Being the leagues only remaining undefeated team late in the season, the Cavs saw every team regardless of their record battling to beat the undefeated. It wasn’t until the Cavs faced the Hoyas for the last time in the regular season, they would taste defeat. The Hoyas eked out a one-point victory on their home court.  And it would be the Hoys the Cavs would have to face again on the rode in the semi-finals to secure their berth into the championship game. And while the game was back-and-forth through three quarters, the Cavs pulled away from the Hoyas earning their ticket to the big show.

The Crusaders were coming into the game representing the faced-paced high scoring Southern Conference, a conference noted for offense, not defense. The Cavaliers had demonstrated some of the most solid and aggressive defense in the league. That defense was expected to overwhelm the Crusaders, while the Cavaliers were expected to struggle against the long-range shooting of the Crusaders. But both teams proved that they were ready for the challenge.

Even with pinpoint shooting the Cavaliers were able to secure a three-point lead at the end of the first and stretch that out to ten by the half leading the Crusaders 74-64 at the end of the second. Midway through the second the Crusaders had built a four-point lead until the Cavs reapplied a full-court pressure defense resulting in a 12-0 run and a crucial swing in momentum.  With five seconds left in the half the Cavs pushed the lead out to ten with Elijiah Moore drained a three from the corner drawing a foul and sinking the foul shot capping of the four-point play.

Championships are often won or lost on the line. But on Saturday, neither team was giving ground. The Cavaliers finished 89% from the line going 23 of 26 and 8 of 9 in the second half. The Crusaders were just as accurate shooting 86%  finishing 12 of 14 from the line.

The Crusaders opened the third with a 7-0 run pulling the game within three. The game continued to be tight with 3:20 to go in the third with the Crusaders within four points of the Cavs, the closest they would get to boys from the Burg before the end of the game.

That’s when the Cavaliers orchestrated another run pushing the lead back out to 10 points with just two minutes left in the quarter.

By the 6:07 mark of the fourth quarter, the Cavaliers had extended the lead to 121-107. The Crusaders began to rally as the Cavaliers struggled from the floor and with turnovers. In an effort to keep the pressure on, Coach Dixon again applied full-court pressure with four minutes left in the match-up forcing the Crusaders into tough buckets. Carolina managed to gain some ground but not enough as the Cavaliers went on to win the championship 134 to 124.

The Crusaders had four players in double digits including Jalin Alexander with 22, Rob Whitfield with 29, Ryan Scott with 35 and Cornelius Reynolds who posted a double-double with 27 points and 10 rebounds.

Two bonus games remain in the 2022 season. The Petersburg Cavaliers will travel to Manchester, CT to face the Hartford Shockers in the ECBL’s SuperCup  on Saturday June 25th. The final game of the season will be the All-Star game held July 9th in Charlotte, NC.