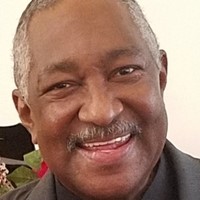 Michael H. Debose Sr. was born in Petersburg, Virginia on February 10, 1959.  He was the only child to Jennie Fogg Debose and the late Robert H. Debose.

Michael graduated from Petersburg High School in 1977 and went on to attend the University of Charleston.  After returning to Petersburg, he worked for many years and spent his last years working at Hill Phoenix.  Michael joined Third Baptist Church at the age of 7 through baptism and later became a Deacon.  He worked faithfully as a Deacon for Third Baptist for many years.

Michael was fun loving, had a contagious laugh and was seldom seen without a smile on his face. He will continue to dwell in our hearts forever.

Services will be held 1:00 P.M., Saturday, May 7, 2022 at Third Baptist Church, 550 Farmer Street, Petersburg, VA, the Rev. Eddie Williams, eulogist. The interment to follow at the Dodson Family Cemetery.