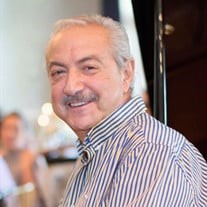 Antonino Salvatore Buffa (Tony) passed away April 29th, 2022 after a long illness. Tony was born in Palermo, Sicily in 1951. He came to the United States when he was 24 years old. After moving to Virginia from Pennsylvania he opened his first restaurant in 1977. He was a wise and ambitious businessman and worked hard every day to build multiple businesses in Richmond and the surrounding areas becoming a pillar in Dinwiddie County even helping many others to start their own businesses. Tony was a great man with a huge heart and would help anyone who came his way. Tony loved his community and all his loyal customers who became family. He was a member of St. Joseph’s Catholic Church and a devoted family man. His life’s goal was to build a future and a legacy for his children, grandchildren and great-grandchildren. Tony was preceded in death by his parents, Salvatore & Girolama Buffa; and a son, Alessandro Buffa. He is survived by his loving wife, Deborah Buffa; three children, Salvatore Buffa (Tillary), Giancarlo Buffa (Maigen) and Elisa Buffa (Lisa); ten grandchildren, Maceo, Antonino, Elio, Liliana, Christian, Piero, Rachael, Joshua, Alisan and Lexi; four great-grandchildren, Kimber, Charlotte, Blakely and Oakley; his mother-in-law, Shirley McMonagle; one brother, Giuseppe Buffa (Anna); his many friends and extended family in Italy; and numerous nieces and nephews. A Mass of Christian burial will be held at 11:00 a.m. on Wednesday, May 4, 2022 at St. Joseph Catholic Church, Petersburg, VA with Father Gino Rossi, celebrant. Entombment will follow at Southlawn Memorial Park, Prince George, VA. The family will receive friends from 5:00 to 8:00 p.m. on Tuesday, May 3, 2022 at the Dinwiddie Chapel of J.T. Morriss & Son Funeral Home. In lieu of flowers, contributions may be made to St. Jude Children’s Research Hospital, P.O. Box 2151, Memphis, TN 38101 in memory of Antonino Buffa.