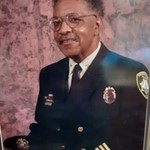 On Wednesday, May 18, 2022, Former Chief Morris Jones, 70, of Petersburg, Virginia, transitioned to eternal rest in his home, with close family at his side.

Morris was born on January 26, 1952, as the middle son of the seven children of the late Murel Matthew Jones, Sr. and Doris Coretha Dugger Jones.

Morris graduated from Peabody High School in 1970 and began working as a patrol officer for the Petersburg Police Department in 1974. After being promoted to Sergeant in 1978, he completed his Bachelor of Arts in Sociology from Virginia State University (VSU) in 1981.

Serving as Lieutenant from 1982 – 1994, Morris expanded community relations programs and sought opportunities to increase his training and responsibility in the Petersburg Police Department.

While working as a Lieutenant, he earned his Master of Interdisciplinary Studies in Public Administration, Administration of Justice, and Guidance; he was one of the first class to complete that program at VSU in 1987. It was one of many full-circle moments when he began teaching as an Adjunct Instructor in the Department of Sociology and Social Work in 1989, where he taught Criminal Justice, American Law Enforcement, Juvenile Justice, Corrections, Criminology, Social Science for over 20 years. His commitment to learning and teaching, and his undeniable leadership capabilities led to his promotion to Captain in 1995 and then to Deputy Police Chief from 1996 – 1999.

Morris crowned his 31 years of dedicated public service in the Petersburg Police Department with a promotion to Chief of Police in 1999. His platform of “Up Close and Personal” redefined a guideline for policing that reflected his community relations roots and his desire to see the city’s residents being treated fairly in every circumstance. After retiring from the Chief of Police position in 2005, he rededicated time to service in many organizations, including the Fraternal Order of Police, Concerned Black Men of Petersburg, the Delta Omega Chapter of Omega Psi Phi Fraternity, Inc., as well as serving in various capacities at the Cawson Street and Petersburg Churches of Christ.

Many may not know that Morris was an avid gardener, who regularly fed his family and extended family with an assortment of greens, peppers, tomatoes, potatoes, string beans, squash, cabbages, carrots, pears, and even watermelons from his own gardens over the years.

In addition to his green thumb, Morris prided himself on his musical ear. Throughout the years, he served as song leader at several Churches of Christ, and he enjoyed music of many genres, including jazz, gospel, soul, and acapella singing. If he found himself in the room with a piano or keyboard, you may have even caught him playing and singing a song or two…

In an interview while working as Chief of Police, he was asked, “How would you like to be remembered?” He succinctly and confidently replied, “As someone who always did his best at whatever he did. As someone who was fair.”